By Collection » Best Of » Edgar Degas 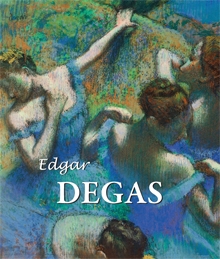 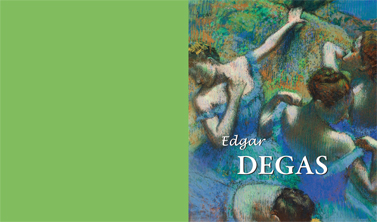 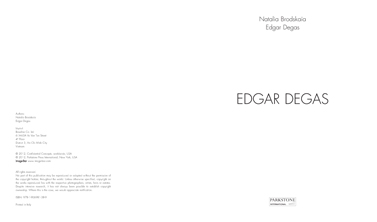 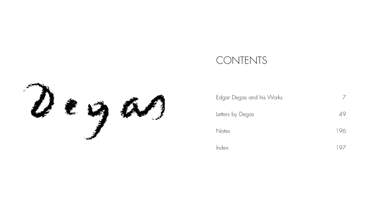 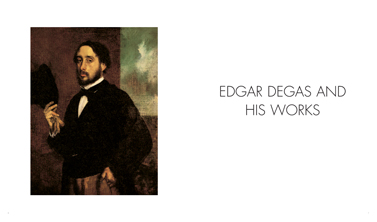 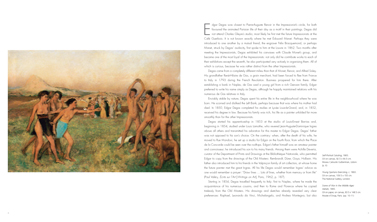 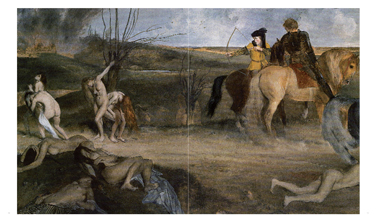 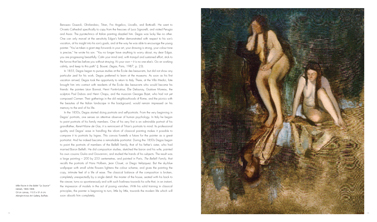 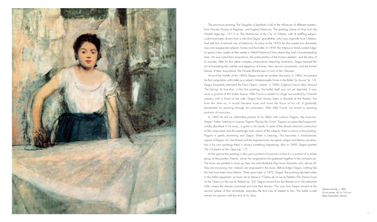 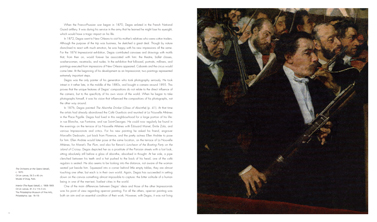 Degas was closest to Renoir in the impressionist’s circle, for both favoured the animated Parisian life of their day as a motif in their paintings. Degas did not attend Gleyre’s studio; most likely he first met the future impressionists at the Café Guerbois. He started his apprenticeship in 1853 at the studio of Louis-Ernest Barrias and, beginning in 1854, studied under Louis Lamothe, who revered Ingres above all others, and transmitted his adoration for this master to Edgar Degas. Starting in 1854 Degas travelled frequently to Italy: first to Naples, where he made the acquaintance of his numerous cousins, and then to Rome and Florence, where he copied tirelessly from the Old Masters. His drawings and sketches already revealed very clear preferences: Raphael, Leonardo da Vinci, Michelangelo, and Mantegna, but also Benozzo Gozzoli, Ghirlandaio, Titian, Fra Angelico, Uccello, and Botticelli. During the 1860s and 1870s he became a painter of racecourses, horses and jockeys. His fabulous painter’s memory retained the particularities of movement of horses wherever he saw them. After his first rather complex compositions depicting racecourses, Degas learned the art of translating the nobility and elegance of horses, their nervous movements, and the formal beauty of their musculature. Around the middle of the 1860s Degas made yet another discovery. In 1866 he painted his first composition with ballet as a subject, Mademoiselle Fiocre dans le ballet de la Source (Mademoiselle Fiocre in the Ballet ‘The Spring’) (New York, Brooklyn Museum). Degas had always been a devotee of the theatre, but from now on it would become more and more the focus of his art. Degas’ first painting devoted solely to the ballet was Le Foyer de la danse à l’Opéra de la rue Le Peletier (The Dancing Anteroom at the Opera on Rue Le Peletier) (Paris, Musée d’Orsay). In a carefully constructed composition, with groups of figures balancing one another to the left and the right, each ballet dancer is involved in her own activity, each one is moving in a separate manner from the others. Extended observation and an immense number of sketches were essential to executing such a task. This is why Degas moved from the theatre on to the rehearsal halls, where the dancers practised and took their lessons. This was how Degas arrived at the second sphere of that immediate, everyday life that was to interest him. The ballet would remain his passion until the end of his days.

I think Degas would have loved the modern cemara and its ability to capture action in a split second.He did experiment with photography but it was still in its infancy and so the dancer had to hold the pose for a long time whilst the shot was taken. The photo would lose the whole notion of movement that he was so keen to portray. So he returned to painting.I think that photography is amazing at capturing an instant but for me that can lose the movement whereas with the energy of sweeping brushstrokes it is easier to feel the portrayed flow of movement.