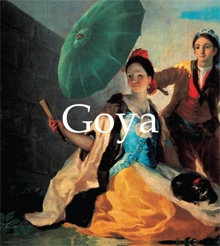 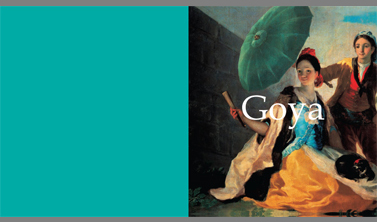 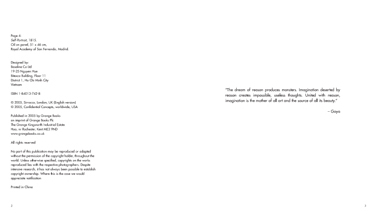 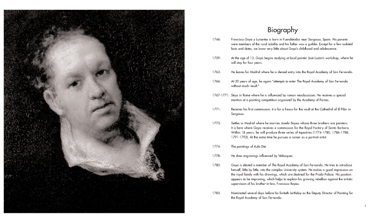 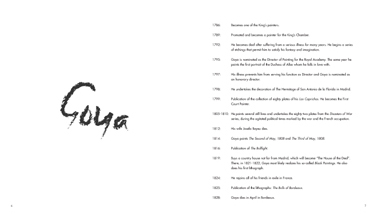 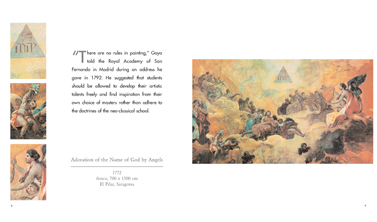 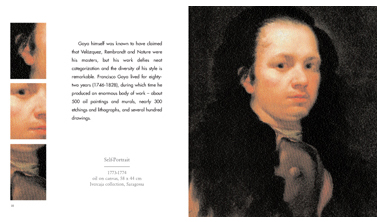 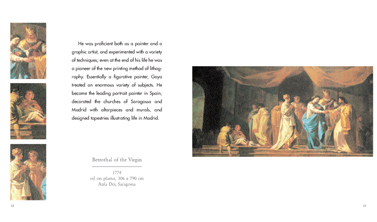 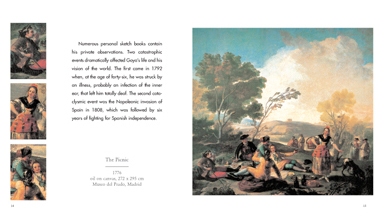 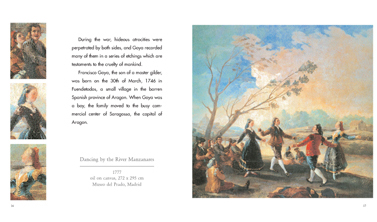 Goya is perhaps the most approachable of painters. His art, like his life, is an open book. He concealed nothing from his contemporaries, and offered his art to them with the same frankness. The entrance to his world is not barricaded with technical difficulties. He proved that if a man has the capacity to live and multiply his experiences, to fight and work, he can produce great art without classical decorum and traditional respectability. He was born in 1746, in Fuendetodos, a small mountain village of a hundred inhabitants. As a child he worked in the fields with his two brothers and his sister until his talent for drawing put an end to his misery. At fourteen, supported by a wealthy patron, he went to Saragossa to study with a court painter and later, when he was nineteen, on to Madrid. Up to his thirty-seventh year, if we leave out of account the tapestry cartoons of unheralded decorative quality and five small pictures, Goya painted nothing of any significance, but once in control of his refractory powers, he produced masterpieces with the speed of Rubens. His court appointment was followed by a decade of incessant activity – years of painting and scandal, with intervals of bad health. Goya’s etchings demonstrate a draughtsmanship of the first rank. In paint, like Velázquez, he is more or less dependent on the model, but not in the detached fashion of the expert in still-life. If a woman was ugly, he made her a despicable horror; if she was alluring, he dramatised her charm. He preferred to finish his portraits at one sitting and was a tyrant with his models. Like Velázquez, he concentrated on faces, but he drew his heads cunningly, and constructed them out of tones of transparent greys. Monstrous forms inhabit his black-and-white world: these are his most profoundly deliberated productions. His fantastic figures, as he called them, fill us with a sense of ignoble joy, aggravate our devilish instincts and delight us with the uncharitable ecstasies of destruction. His genius attained its highest point in his etchings on the horrors of war. When placed beside the work of Goya, other pictures of war pale into sentimental studies of cruelty. He avoided the scattered action of the battlefield, and confined himself to isolated scenes of butchery. Nowhere else did he display such mastery of form and movement, such dramatic gestures and appalling effects of light and darkness. In all directions Goya renewed and innovated.