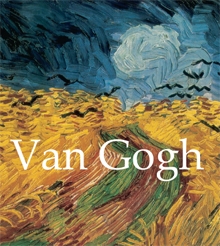 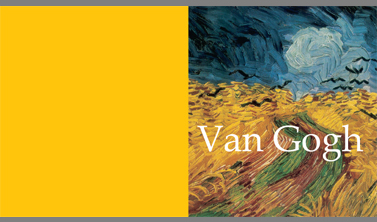 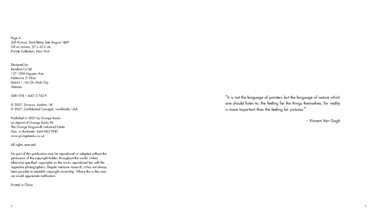 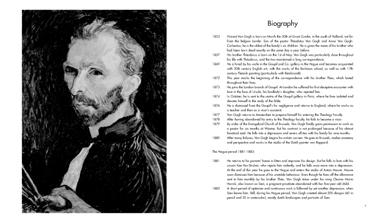 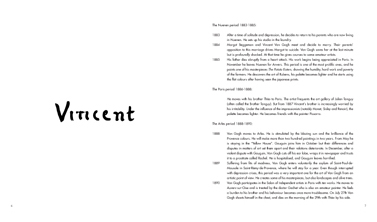 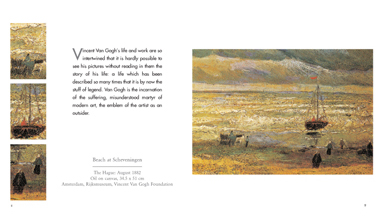 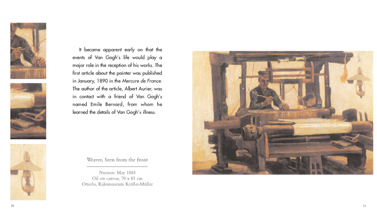 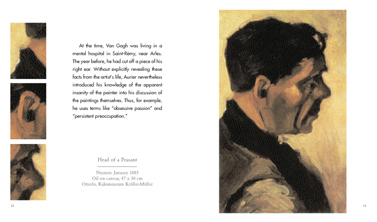 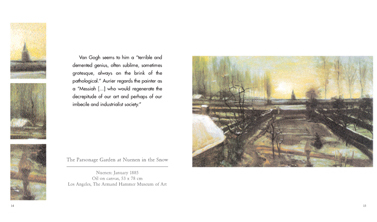 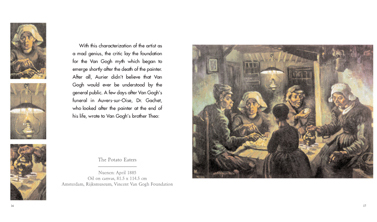 Vincent van Gogh’s life and work are so intertwined that it is hardly possible to observe one without thinking of the other. Van Gogh has indeed become the incarnation of the suffering, misunderstood martyr of modern art, the emblem of the artist as an outsider. An article, published in 1890, gave details about van Gogh’s illness. The author of the article saw the painter as “a terrible and demented genius, often sublime, sometimes grotesque, always at the brink of the pathological.” Very little is known about Vincent’s childhood. At the age of eleven he had to leave “the human nest”, as he called it himself, for various boarding schools. The first portrait shows us van Gogh as an earnest nineteen year old. At that time he had already been at work for three years in The Hague and, later, in London in the gallery Goupil & Co. In 1874 his love for Ursula Loyer ended in disaster and a year later he was transferred to Paris, against his will. After a particularly heated argument during Christmas holidays in 1881, his father, a pastor, ordered Vincent to leave. With this final break, he abandoned his family name and signed his canvases simply “Vincent”. He left for Paris and never returned to Holland. In Paris he came to know Paul Gauguin, whose paintings he greatly admired. The self-portrait was the main subject of Vincent’s work from 1886c88. In February 1888 Vincent left Paris for Arles and tried to persuade Gauguin to join him. The months of waiting for Gauguin were the most productive time in van Gogh’s life. He wanted to show his friend as many pictures as possible and decorate the Yellow House. But Gauguin did not share his views on art and finally returned to Paris. On 7 January, 1889, fourteen days after his famous self-mutilation, Vincent left the hospital where he was convalescing. Although he hoped to recover from and to forget his madness, but he actually came back twice more in the same year. During his last stay in hospital, Vincent painted landscapes in which he recreated the world of his childhood. It is said that Vincent van Gogh shot himself in the side in a field but decided to return to the inn and went to bed. The landlord informed Dr Gachet and his brother Theo, who described the last moments of his life which ended on 29 July, 1890: “I wanted to die. While I was sitting next to him promising that we would try to heal him. […], he answered, ‘La tristesse durera toujours (The sadness will last forever).’”