When German soldiers used to come to my studio and look at my pictures of Guernica, they’d ask ‘Did you do this?’. And I’d say, ‘No, you did.’

When German soldiers used to come to my studio and look at my pictures of Guernica, they’d ask ‘Did you do this?’. And I’d say, ‘No, you did.’ – Pablo Picaaso 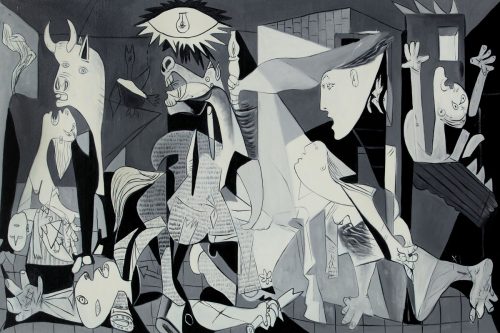 The bloody historical event that moved Picasso to create this masterpiece in one month took place shortly before its first exhibition at the 1937 World Exposition in Paris, where it was shown after it was commissioned by the government of the Spanish Republic. The images and feelings of the three-hour bombing and destruction of the Basque town of Guernica by Nazi planes were still fresh in the public consciousness. The brutally stark, monochrome work was controversial both as a reactive political statement and as art. The black and white must have been inspired by photographs taken of the war, such as those of Robert Capa. Despite the symbolism given to the different elements since the very creation of the painting, Picasso remained very secretive on the meanings of Guernica’s hidden themes and images. 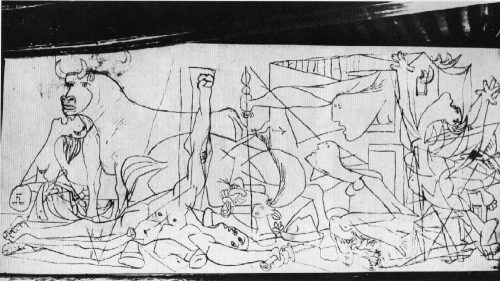 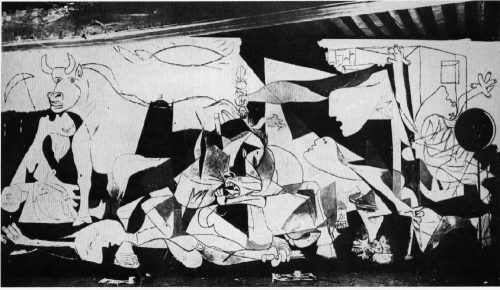 Rarely do we get the chance to see a masterpiece in the making. Dora Maar, Picasso’s lover at the time, documented the frantic activity of Picasso during the month he spent working on what was to become Guernica. The photographs of these two states demonstrate that Picasso invented some of the painting as he went along. Note, in state 1, how a clenched fist takes up the space that would later be occupied by the head of the horse. Even when Picasso began applying paint to the canvas, we see elements that would be modified in the finished version. 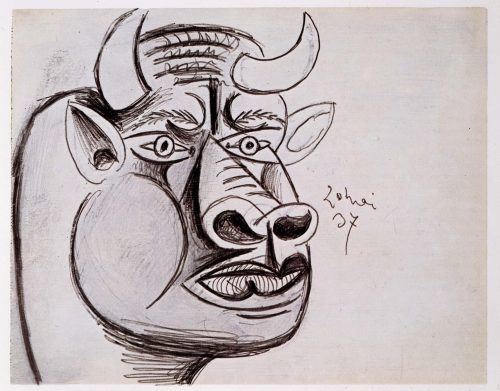 One of the most recognisable figures in Guernica – and in Picasso’s whole oeuvre – is the bull. Many writers understand this to be a symbol of Spain, although Picasso is als noted to have said that in Guernica, it assumed the role of the brutality of fascism. 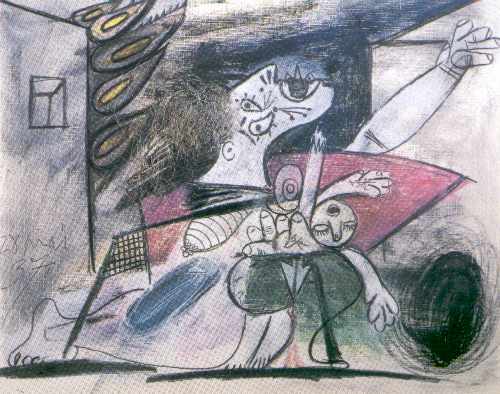 Although one of Guernica’s most distinctive and powerful elements is its reduced chromatic scale, Picasso achieves great dramatism in many of his coloured studies. Such is the case with this Mother and Dead Child, where Picasso even added real hair to the figure of the woman. The tight composition and the nervous, hard lines define its dramatic immediacy. 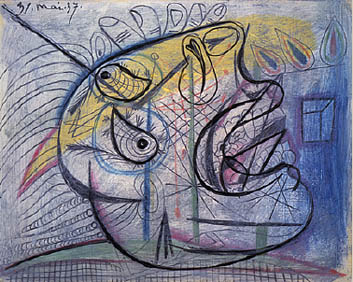 Of all the iconic images that make up Guernica, perhaps the most dramatic is the woman who screams in distress whilst holding her dead child in her arms. Picasso made many drawings and paintings depicting weeping women such as these. Although the present study of this screaming head is not like the one on the final painting, it gives us an insight into the many different possibilities that Picasso considered before making the final work. It also speaks of the artist’s original intentions of including colour in the painting.